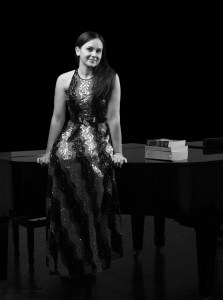 Praised by musicians, audiences, and music critics as an “enfant terrible of Maltese piano”, Charlene Farrugia is one of the most prominent performers of the younger generation. Her extensive performances took off after her debut with the National Orchestra of Malta at the age of 13. She was the youngest soloist to ever perform with the National Orchestra of Malta, and her performance, which was received by a standing ovation, is still very well remembered by critics and audience alike up to this day. Since then, she has been a regular soloist with the orchestra, being asked to open the Malta Philharmonic Orchestra season on several occasions. Her solo appearances with the Orchestra include Mendelssohn’s 1st Piano Concerto, Poulenc’s Concerto for 2 pianos, Grieg’s Piano Concerto, the Bicentenary Celebration of Chopin’s birth in 2010 performing Chopin’s 2nd Piano Concerto, Rachmaninov’s 4th Piano Concerto, Ravel’s Concerto pour la main gauche… Her debut CD, recorded for NAXOS, features the 1st Piano Concerto by Maltese national composer Charles Camilleri, played alongside the Malta Philharmonic Orchestra.

Charlene’s performances have led her to several European and US tours. At the age of 14, she toured Philadelphia USA, and gave several recitals to great public acclaim. Her second USA tour in Virginia included two performances of Chopin’s 2nd Piano Concerto which were both received by standing ovations. Other notable performances include piano recitals for several Heads of State on their official visit to Malta, including Prince Richard, Duke of Gloucester; a piano recital at Château St. Anne in Brussels; The Story Of London series organized by the Mayor of London Boris Johnson, and many others.

After finishing her musical education in Malta with Ms Amodio Chircop, Charlene was a top honours graduate from the University of Malta. She then continued her studies at the Royal Academy of Music in London, graduating with an MA in Piano Performance from the class of Diana Ketler, together with a Licentiate of the Royal Academy of Music (LRAM). She has recently been awarded a Doctorate in Piano Performance from the class of Kenneth Hamilton (University of Cardiff). Charlene currently teaches a Degree Plus piano course at the University of Malta. She has also been listed as one of the world’s great women pianists and is also an EMMA for peace artist. Her mentor is Boris Petrushansky.